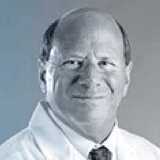 He is a Professor of Neurology at UT Southwestern and is board-certified in neurology and vascular neurology. After earning his medical degree with Alpha Omega Alpha (AOA) honors from Tufts University in Boston, Massachusetts, he completed a neurology residency at Duke University in Durham, North Carolina, followed by a National Institutes of Health (NIH) sponsored fellowship in cerebrovascular disease, also at Duke. While on the faculty at Duke, he was Director of the Stroke Unit, Transcranial Doppler laboratory, and the Acute Stroke Team. He has received numerous awards including the Affiliate of the Year Award from the American Heart Association (AHA) and the National Brain Resuscitation Award. Many organizations including the AHA and NINDS have provided him with grant support, and he has been funded by NIH to study the genetics of cerebral aneurysms. He is a member of various committees and boards, including the Brain Attack Coalition, AHA Board of Directors, and the Illinois Stroke Task Force. He has been the chairperson for the AHA Brain/Stroke Study Group and serves on two NIH Study Sections. He assisted in establishing the Stroke Belt Consortium, a highly successful regional organization to improve stroke education.

Dr. Alberts’ current research interests include studying genetic etiologies of stroke, identifying new treatments for acute stroke, and studying new medications and interventions to prevent strokes. He has also been very active in studying aspirin resistance in stroke patients. An author of more than 150 articles and book chapters, he is the Genetics Section Editor of Stroke, the editor of the book Genetics of Cerebrovascular Disease, and formerly the editor-in-chief (Neurology) of the Journal of Neurovascular Disease. Dr. Alberts has been an invited speaker at numerous national and international meetings and is on the Global Publications Committee for the REACH Registry.