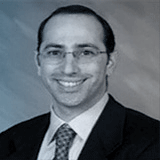 Much of Dr. Angiolillo’s professional career has been devoted to cardiovascular research in the field of interventional cardiology and acute coronary syndrome. His largest national and international recognition has been for his pivotal contributions in the field of thrombosis. In particular, Dr. Angiolillo has performed seminal studies on platelet function and modulation of antiplatelet drug response, including genetic studies. He has received national and international academic recognitions for this work. Recognitions include the 2013 Outstanding Achievement Award from the European Society of Cardiology and, since 2014, Dr. Angiolillo has been in the top 1 percent of most-cited researchers worldwide, according to Clarivate Analytics. Dr. Angiolillo has been a key investigator in the clinical development of numerous novel antithrombotic agents. He works alongside drug-regulating agencies in the United States and Europe toward approval of these drugs and product labeling updates. His success in obtaining extramural funding has allowed the development of one of the most active clinical research centers in the United States as well as one of the leading centers for thrombosis research in the world.

Dr. Angiolillo has made major scientific contributions to many medical and cardiovascular journals, as well as cardiovascular medicine textbooks. He has authored more than 400 peer-reviewed articles, with nearly 30,000 citations and an h-index of 86. He has authored more than 30 book chapters and is the editor of his own textbook on antithrombotic medicine. Due to his major contributions in antithrombotic therapy in patients with cardiovascular disease manifestations, Dr. Angiolillo has been invited to deliver lectures worldwide. His international visibility has allowed him to develop a very active research training program, attracting physicians and scientists from across the globe. In addition, Dr. Angiolillo has been a clinical mentor for years to residents and fellows, resulting in several Exemplary Teacher Awards. His leadership role as an academic clinician and scientist allows to him to nurture and promote career growth of many young trainees in the United States and abroad.